← Episode ABC.1.1: "Blipverts"
Episode ABC.1.3: "Body Banks" →
The first episode of the ABC series to be aired was a later production number that shows all the hallmarks of being rushed to completion.

We're 20 minutes into the future in a Fringer wasteland at night, with montage-stacks of TVs showing eerie sequences of images. A Fringer woman mutters instructions into a microphone - to whom, we don't yet know.

At first, it was skateboarding. Then it was boarding on crudely motorized skateboards. Then it was a rougher street sport where the accidental collisions became deliberate moves as skaters worked to knock each other off their boards. And when the sports promoters got ahold of it, it turned into an underground blood sport where the "rakers" are armed with steel claws to enhance the damage while gamblers wager on their bouts. A young "raker" stops to look at a TV, and finds himself talking to Max.

Max has become concerned about the homicidal madman he sees running around and laying waste to 100 people an hour. Since the whole world is television to him, he doesn't realize that "Missile Mike" is a violent TV show - part of Network 23's children's programming - and not reality. With his new control of Network 23's computers and broadcasting, he pops up here and there, querying the viewers about the effects of this mindless violence on the mindless.

When Theora receives a frantic phone call from her sister-in-law Winnie, she comes running to help only to find that Winnie will not tell her where her estranged brother Shawn is. Theora traces him to the posh restaurant where he works, only to find he has lost his job as a busboy... and to get an ugly hint that he's involved with raking.

Theora's abrupt departure from her station leaves Murray, out of practice and inept, to cover Edison Carter on a story - an attempt to catch the "Bureau Burner" arsonist. Murray's clumsiness with the newer equipment causes them to fail. Theora's unexplained departure infuriates Murray, who orders her put on suspension or fired, even though Carter objects.

Concerned, Carter tries to convince Bryce Lynch to make an end run on Network 23's security and show him the security tape of Theora at her workstation. Bryce dithers; suddenly the material is up on the monitor, courtesy of a chuckling Max Headroom. With that and a look at Theora's personnel record, which mentions several unknown items of interest including her brother, Carter takes off in search of her. In the meantime, Shawn has been badly hurt in a raking match.

When Carter catches up with Theora at the restaurant, just as she's learned that her brother no longer works there, she is angry at being followed. She tells him that she lived for 12 years in state homes, and was adopted but left Shawn behind - something for which he's never forgiven her.

It's then that we find out that Jack Friday of the Network 23 sports division has shown the sport to Ped Xing, the head of the network's biggest advertiser, the Zik-Zak Corporation. If Zik-Zak is interested enough, they'll build a chain of stadiums for raking teams... and give Network 23 exclusive worldwide coverage, with corporate advertising, to replace the declining "Missile Mike" and other violent shows. And legislator Simon Peller is being convinced to help legalize the sport.

Theora goes back to her console as Carter heads into the wastelands to find Shawn. At the Ouzo Bar, he hooks up with a tough street rickshaw driver, Rik, whom he apparently knows from prior adventures in the streets, and together they set off to find one of the clandestine raking matches.

Rik advises Carter that Shawn is in big trouble if he's connected with raking. They set out to find another raker to tell them where the current matches are being held. They find one, and get into a match, only to find that the injured Shawn is losing a brutal match. The promoters have been paid by Zik-Zak and are slipping away, leaving the problem in Network 23's lap.

Carter jumps in with his camera but is knocked down and the camera damaged. Rik finds a television with Max on it, and via the two-way link (authorized by a watching Cheviot), Max takes the ugly story live, ending raking as a promoted sport and as a Network 23 program.

Theora evidently mends fences with her brother and both she and Carter are made uncomfortable by Winnie's suggestion that they start a family, too.

Although we got glimpses of the raw post-apocalypic wasteland where most people seem to live in the first episode, this is the first time we get a detailed, wide-angle look at life "20 minutes into the future." The "fringe" is a rough, grim place where many appear to be homeless or living in patchwork shelter, and rats are caught for food. More than ever, it looks as if society consists only of a vast underclass and the lords of television and advertising ruling them.

Brief references in prior episodes to TV shows "The Rat Catchers" and "The Rat Killers" become understandable as we're shown rats loose on the streets and hanging up on food carts.

Shawn's comment confirms that the vast piles of freely provided television sets have no off switches.

Even more interesting to hear is that the "Bureau Burner" arsonist is burning the Tax Data Center to protest "the new TV tax." This seems to be a leftover of the British influences, since TVs are licensed (and taxed) in the UK but not the US.

The network control center, at least the one where Murray and Theora work from, is on Level 40.

Among the things the glimpse of Theora's personnel file reveals are details about her brother, Shawn Jones, who works as a busboy and lives in the Metro Projects, Block 555 A. Even more interesting are the notations that her mother is deceased and her father is unknown. Add in her comment about "twelve years in state homes" and Theora's personal history appears to be very much at odds with her polished elegance.

Raking appears to be one-on-one matches. The referee drops a wooden "flag" and one raker must take possession of the flag to win... by disabling the other raker.

Carter catches up with Rik in the "Ouzo Bar." It seems odd that Fringers would drink the Greek anise liquor ouzo...

Rik has a motorized rickshaw in this episode, but only a foot-powered one in "Body Banks." Depending on which order the episodes follow, he's either come up or gone down in the world... or perhaps has more than one "cab."

The mentions of "New Tokyo" and "Novo Zurich" raise questions about what's happened to the world since our time.

If Simon Peller is Network 23's tele-candidate, as we find out in later episodes, it is peculiar that Murray and Cheviot are so quick to take the story public.

Thanks to BlankChrissy for a key actor ID in this entry!

This episode uses a polished version of the opening credit sequence, but still no dialogue.

This episode has no subliminal credits in the Zik-Zak montage. 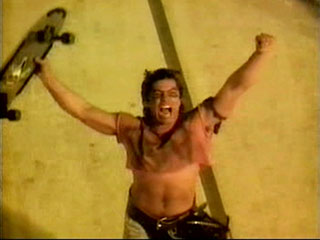 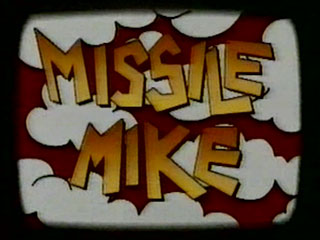 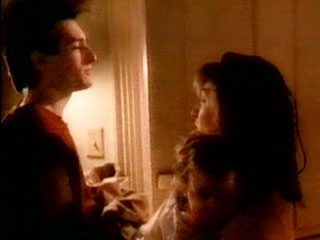 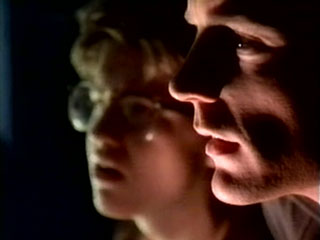 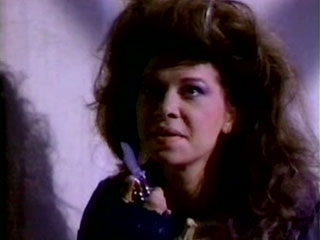 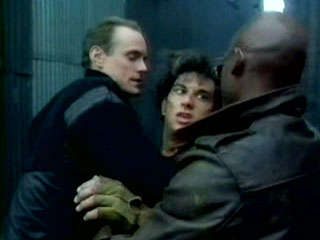 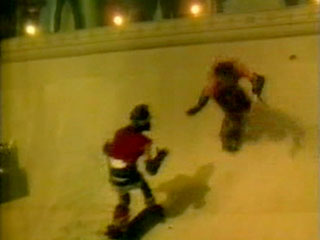 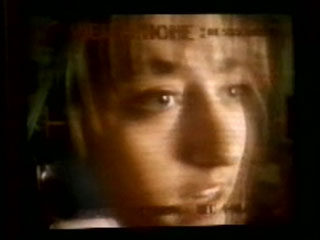 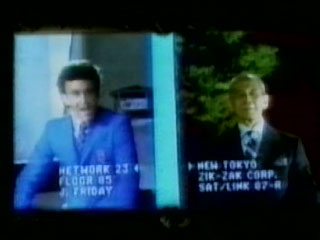 Raker: "Me?"
Max: "Yes! Yes! You with that plank on whee-whee-whee-whee-wheels. What is its effect-t-t-t on you?"
Raker: "You can see me?"
Max: "Well. That was a fas-fas-fascinating discussion and I think you've answered my question. Thank you-you-you-you, thank you... for your help."

Jack Friday: "And we have a chance to come in on the ground floor, I mean, this could be big! ...bigger than Scumball!"

Theora: "What do we have as standby?"
Murray: "'Producer Dies of Boredom.'"

Console: (beeps and ticks)
Carter: "How did this happen?"
Max: "Maaax. (giggles) It's great. Flip-flop!"

Carter: "Neither did I."

Carter: "I'll have a scotch with ice, and she'll have a Blizzard."
'The Fresh Start' Terminal: "One scotch with ice, one Blizzard, coming up."
Carter: "We had some excitement after you left, uh, we had a chance at the 'Bureau Burner'... at least, we think it was the Bureau Burner, anyway. Unfortunately, I had Murray sitting in as my controller."
Theora:"I suppose the next thing you're going to tell me is I've been fired."
Carter:"Murray seems to think so, yeah. But I don't."
Carter:"How come you never mentioned you had a brother?"
Theora:"There are lots of things I've never mentioned about myself. Twelve years spent in state homes cures you of any need to think back on the good old days."

Simon Peller: "I'm working on it, Jack, really I am, but, uh, you know how slow the decision-making process can be. I'm spending lots of time with my colleagues on the legislature."
Ped Xing: "Zik-Zak will be investing substantial sums of money in the marketing and promotion of this game, Mr. Peller."

Theora: "Run away or... boast, normally."
Max: "I wonder what Edison would do. He would be: A, concerned; B, anxious; C, distressed and D, sorry."
Theora: "Yeah; he would also interfere."

Background: "Rat meat to be had!"

Raker: "How did you cut me off like that?"
Rik: "We got friends in high places."

Murray: "Go ahead."
Carter: "Raking. It's called a sport. In fact, it's a vicious exploitation of kids who are encouraged to hurt each other for the pleasure of the audience."
Murray: "All right. Let's run with it."

Carter: "I want to know how to get into that rake track."
Rik: (laughs)

Spectator: "Look out!"
Theora: "The camera's down, Murray."

Carter: "Yeah. Eventually. (baby cries) You ever get used to the sound of babies?"