Difference between revisions of "Episode CH4.3.2"

This episode opens with a signature piece of Max bizarreness: Max giving a sad end-of-the-show farewell over the closing credits. The regular title sequence then runs... and we're into the game show, "Quiz!"

The "Ridley" sidekick doesn't seem to have survived to a second show.

Vidal Sassoon turns out to be a witty, acid and unflappable target for Max's riffs. It may be one of the few Max show "debates" that the judges would have to give to the visiting team. Of course, by this time Max and his approach to interviewing were better known and rather than expect a gentle comedy exchange, Sassoon went in prepared to deflect Max's snark. Only Sting seems to have done almost as good a job overall, and he had little or no warning of what to expect. (At least one of Sassoon's comments about golf reflects Sting's replies as well.) In any case, the interview segment is one of the fiercest of the entire set.

The snark about Sassoon's good looks is clearer if you understand that Sassoon was just short of 60 at the time, and looks at least 20 years younger. (But what would you expect?) He would live until he was 84. His serious comments about dying with his full faculties ("I don't see myself as a cabbage") proved to be true, and he was active and involved with his business and philanthropic efforts until his last days. Frankly, he was a pretty fascinating guy. 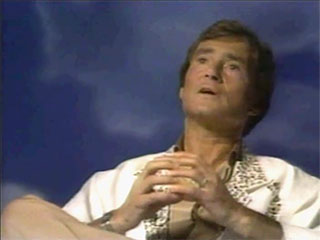 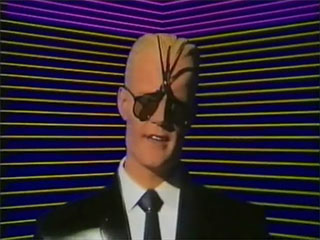 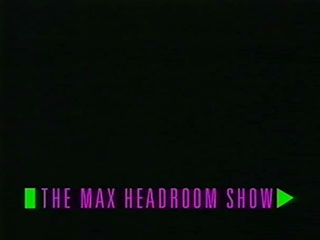 Commercial placeholder card used for this and later episodes.

But France of course means wine, and its symbol must surely be... the grape-the grape. Oh? Like the French: the grape. Tough on the outside, bumped(?) on the inside with little bits that want you make to spit. Yep-yep-yep! The French wine." (accents make remainder unintelligible)

Vidal Sassoon: "Well, what did you expect, Max... I mean, really? Health foods every morning; vitamins; sixty pills a day..."
Max: "Quick dry cement in the old crow's feet?"
Vidal Sassoon: "...jumped into the pool this morning... I mean, I try and do it all."

Vidal Sassoon: "Cutting hair you earn a damned good living - you meet an awful lot of marvelous people, interesting people, fascinating people, which helps you in your growth. That's exciting."
Max: "Hair growth?"
Vidal Sassoon: "Yeah, hair growth, yeah. ...you could use some."

Vidal Sassoon: "On you, about a half hour ago."

Vidal Sassoon: "Well, if you look around any city, most people must be very unhappy and very insecure, because they dress... for instance, you must be very secure - look at you. You're the epitome of what most kids would want to look like when they grow up... if they don't get lucky. Very few people have the courage to be an individualist, and I find it very exciting. I'm kind of, almost in trepidation, because when I work with people on television before, you look into their eyes, to get the sense of them, and you're talking to a human being. I sense I'm... in some sort of capsule, talking to a robot. It's kind of exciting."
Max: "Are you on drugs, Vidal?"
Vidal Sassoon: "Uh... I will be, after I leave this show, I can assure you."

Vidal Sassoon: "God, I think that's for old men - it's such a dreary goddamn game... my God. How do you get into that thing? I mean, four hours, walking around..."
Max: "[I swear to hell(?)], if I had a howitzer now, I would turn it on you so god damn fast..."
Vidal Sassoon: "...with a bunch of drunks... I mean, what kind of exercise is that?"
Max: "You said you were into esthetics... you don't think-think that Seve Ballesteros' backswing is esthetic?"
Vidal Sassoon: "Yeah, but it happens once every ten minutes."
Max: "What do you mean it's every ten minutes? What about when he's on the practice range?"
Vidal Sassoon: "Uh, most people are not interested in practices, just in the real thing. I think golf is an absolute bloody bore."
Max: "You don't think practicing is the real thing? What about the hours that you slaved away with your garden shears, practicing for the time when you would get a chance to do your god damn Madame Pompadour hair style?"
Vidal Sassoon: "Yes, but I didn't expect anyone to watch me practicing, and I didn't."
Max: [babbling and distraught] "But you were doing it for you-you, and that's important!"
Vidal Sassoon: "Well, if you feel that... that-that truly about golf, I have to tell you: I hate it."