The discussion of Ullman's US series would come to fruition in "The Tracey Ullman Show," which ran from 1987 to 2000, a total of four seasons of variety perfomances by Tracey as singer, dancer and comedian. There are many comparisons between this show and Max's early days: it premiered in the first week of April on a new network (Fox) struggling to create fresh material, and each network gave its unorthodox performer a lot of control and freedom. (Ullman's show is perhaps most famous and best remembered as the genesis of the long-running animated show "The Simpsons," which started as brief advertising "bumper" skits on her show.) 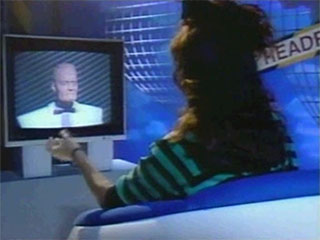