The introductory riff shows three clips of things to come, one of which is Howie Mandel using one of his strange voices. Another of them - Max doing a strange "German" riff - doesn't appear at all, which becomes entirely consistent with this episode. This show seems rushed throughout, probably in order to fit a slightly lengthier-than-usual interview with Howie Mandel. There are only three videos, one of which is twenty-five years old and two of which appear in very abbreviated form. The end credits are on a high-speed roll under other material, and "Quiz! is compacted to a here-it-comes/there-it-goes passing gag. In the end, there's next to nothing worth commenting on, other than the interview.

What's even more odd is that they insist Mandel is the first comedian on the show, when it's only two weeks after Tracey Ullman's appearance. That agreement again? Or is it a gender issue - she was just a comedienne? Or was this remote session shot in advance of the Ullman show? In the end, this interview is perfunctory and ignorable, with hardly a worthwhile moment. It all comes off as an example of a minor talent at the very peak of his or her career, insisting on every privilege - and a struggling show capitulating to catch a hot name in the listings. 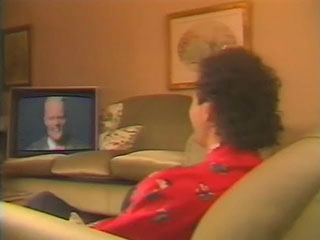 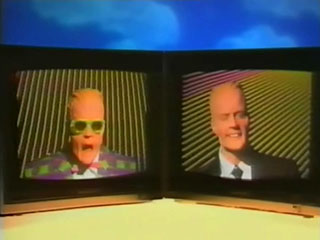