Deprecated: assert(): Calling assert() with a string argument is deprecated in /home/customer/www/maxheadroom.com/public_html/includes/parser/Preprocessor_DOM.php on line 542
 Max: Advertising - The Max Headroom Chronicles

From The Max Headroom Chronicles
Revision as of 17:30, 3 January 2016 by Max Headroom (talk | contribs)
(diff) ← Older revision | Latest revision (diff) | Newer revision → (diff)
Jump to: navigation, search
Max Headroom was basically born as an advertising avatar, to promote both the new Channel Four and his own initial show. He has been used by a number of advertisers since, including a late return to Channel Four.

Data on Max's advertising appearances is incomplete, and updates and additional information are solicited!

The original purpose of Max was to draw attention to the UK's Channel Four and his own talk/video show thereon. There's not much more to say about that, as everything that followed is documented throughout this site.

Very much a case of "the medium is the message" - except that Max was more of a l-large than a medium.

Let's just-just get this out of the way: If someone knows Max for just one thing, it's either the ABC series or the massive advertising campaign for the second rollout of "New Coke." The intersection of Max and New Coke is so large and significant that it's been assigned its own (developing) subsection here on the site. 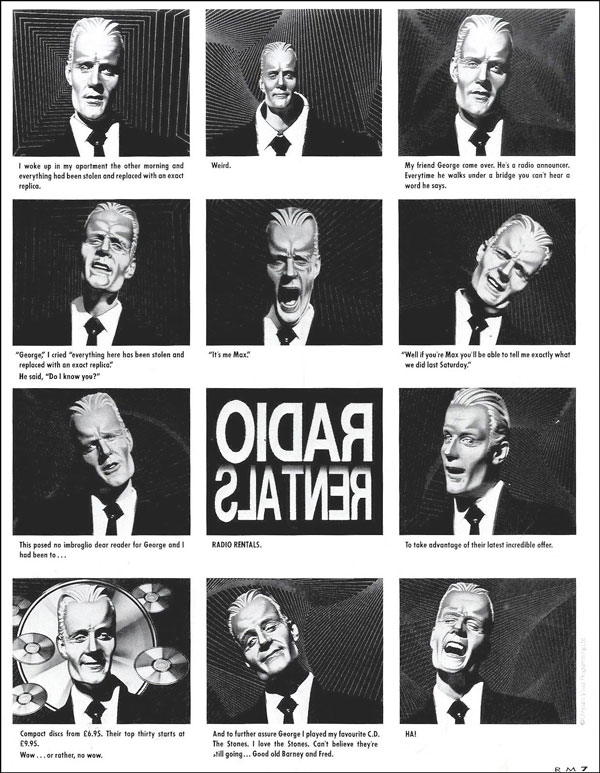 Ad from the Record Mail, 19 July 1986. George is a common enough name (including Matt Frewer's middle one), but I like to think Max is referring to his creator, George Stone.

Despite being the most obvious and available product pitchman of his era, Max's only straight-out gig for a general consumer product — other than Coke — was his appearance in television and print ads for Radio Rentals, a TV-rental service in the UK. A print ad, which strongly resembles a storyboard for a video commercial, appeared in UK newspapers.

There were also four television advertisements, none of which followed that storyboard, oddly enough. The ads were reportedly produced by Rocky Morton and Annabel Jankel, and followed the visual format of the video/talk shows, especially the full-screen titles. 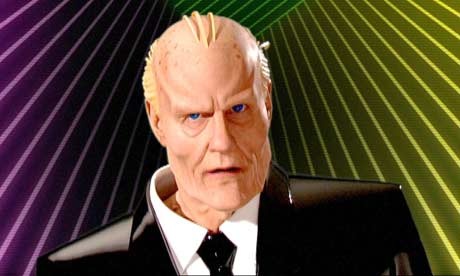 When Channel Four and its subsidiary channels (and how very "twenty minutes" that is) were prepared to switch over to digital service, they hauled Max out of cold storage and used him in a series of ads promoting the change. Six ads, running from about five seconds in length to just over a full minute, were produced in late 2007 and rolled out on December 1, 2007.

Original producer/director Rocky Morton was called in for the project, along with Matt Frewer in his first return to Max makeup since 1989. Max was given new "old age" prosthetics, makeup and effects, and presented as being in a retirement home in his old-fashioned, six-channel tube TV.

Max being Max, he was of course angry, bitter and a little foulmouthed at being retired and forgotten, and even more so over having been ignored about telling everyone about the digital TV revolution twenty years earlier. Fortunately, his aide Darren is patient with him. (Watching the ads, you have to wonder how much of the bitterness is scripted, and how much is genuine with Matt Frewer...)

Thanks to Blank Andrew from downunda for the pointer to the fifth video ("The Word 'Digital' " with Max on a bus). Just one more find and we'll have the whole set...
Retrieved from "http://www.maxheadroom.com/index.php?title=Max:_Advertising&oldid=5225"