One of the more bizarre Max spin-offs was the use of a very Max-like character to pitch Deutsche Telekom's mobile service, branded T-Mobile after the US service of the same name, logo and signature color (magenta). 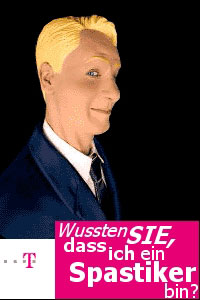 The translation of this ad is "They knew that I am a spastic?" - which can't be right...

Unlike Max, "Robert T-Online" was a full-figure character with hands and arms and legs and everything, but otherwise, he was the same kind of strange plasticky robot/computer image avatar. Like Max, he was portrayed by an actor in prosthetics, Matthias Kostya, and with additional video processing.

These entries will be expanded and added to the listings above as time permits.

This sitcom, a running parody of tough-guy cop shows, ran on ABC in the same years as Max's show. It used a punning title and parodic theme for each episode of its two-season run. One, almost inevitably, was based on the title character becoming Max-Max-Maxified.

The animated series featured Carmen's boss, seen only as a talking-head on TV.