Pages that are UNDER CONSTRUCTION may be incomplete, have broken links or contain unverified information.

If someone knows Max Headroom from just one thing, it's probably not the talk shows or the ABC series... it's the doomed campaign to sell "New Coke" to a market that had already rejected it once. 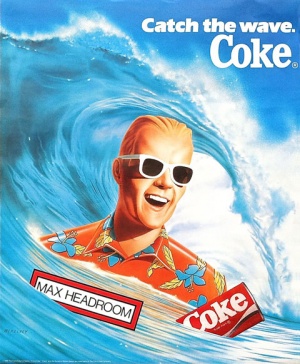 I have decided not to try and fold the Coke material into the rest of the site. There's just too much of it and it's almost worth a site of its own.

Keep an aye-eye on this space, though: I intend to assemble a definitive look at the New Coke campaign in general and Max's heroic efforts on its behalf.