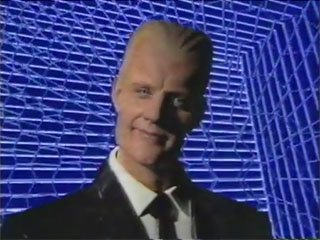 Clip showing one version of the "lattice" background believed to be unique to Season 1. Most variations have a more pronounced "cell" look instead of straight lines.

The "latticework" background of slightly fuzzy, sparkly neon lines that change from "cells" to lines and uniformly change colors across the spectrum is believed to be unique to the first season. There are several variations, and at least one Season 1 clip has multi-colored lines but of the same fuzzy, sparkly neon look. Any clip of Max with these styles of background can be presumed to be from the first season until proven otherwise.

The better-known "bouncing colored box of lines," more finely drawn and with a less garish neon effect, indicates a clip from a Season 2 or later show. Again, as far as we know.